The third movement begins at about 8:12, as the party moves to the last stage of the tower comprised of two beings: Lady and Rest. The impact of this transition is what led me personally to think more deeply about what this game was trying to accomplish, and eventually led up to this blog post, and the series itself. Looking at the last two creatures on the tower, no one would think to call them Lady and Rest. And how suspicious it is that the movement features the organ, an instrument which (to our loss) is quite uncommon. The organ has played a relatively prominent role in the rest of the game, but now has an entire movement devoted to it.

The organ may suffer today from its seemingly inseparable ties to sacred music, being found almost exclusively in churches dating all the way back to Middle Ages. We also tend to tie organ to the Baroque period specifically, because of this one guy called Bach who wrote a lot of Organ music–some sacred and some secular. (I guess he was a big deal or something.) Both Bach having written some of the most famous organ literature to date, and organs being found principally in churches since the Middle Ages, have affected the way we hear the organ today. Now we think of it as being both Baroque and sacred, making it hard for a composer today to write for organ and not make those associations in the hearer.

Up to this point, Uematsu ignored those associations and successfully found good use for the organ’s sound in the whole soundtrack. It even had a powerful effect in the first two movements of this finale and fit well with the other more modern music in video game soundtrack sounds. But the other convenient use of an instrument with such strong ties to one style is using it to spark that very idea in the listener, and that is exactly what Uematsu also did. While it had been used very unconventionally in comparison to both Baroque period and sacred organ music, Uematsu allows the conventional associations to dominate in this movement.

While it is not solely sacred, take a moment to listen to Bach’s Toccata and Fugue in D Minor. Listening back to the third movement of Dancing Mad, there are moments in which I think the organ solo is an exact copy of parts in Toccata and Fugue in D Minor, and possibly one of the greatest moments in the fugue-like third movement is found at 8:40 where Kefka’s leitmotif is integrated in the bass line. If you go back and look at the top of the tower you can notice the gold light shining down on Lady and Rest. They clearly recall Michelangelo’s Pieta, so I don’t think the visual artists missed out on this stab either.

Alright, before we get into Movement IV there is a lot I have left in the air that I need to spend some time with. This is all a combination of common theories and my own inputs, and I think it holds together pretty well.

The artists and writers are using concepts behind Dante’s The Divine Comedy as a way to further their development of Kefka. This tower is Kefka’s most powerful and final creation, and as everything in the finale has showed, Kefka has a fascination for the divine. The tower is a depiction of the Hell, Purgatory, and Heaven of The Divine Comedy. The bottom of the tower is the representation of Hell with the monster, Visage, being the face of the Devil. The quartet of the middle of the tower is Purgatory, the place for those who don’t believe, which includes the enemies in this game: Power, Tiger, Magic, and Machine. These four entities are named after what would have brought a person into Purgatory: power to the player, beast-like in nature and wild when following rules came to importance, trust in “magical” powers separate from God, and belief in only what can be created by man. The top of the tower is the representation of Heaven where Dante met saints and angels, which is very fitting for the enemies Lady and Rest, who form a twisted replication of a sculpture of Mary holding Jesus after his crucifixion. Dante’s journey ends meeting God himself and God tells him the meaning of life. This twisted recreation of The Divine Comedy follows very closely as Kefka, who considers himself a god and the ultimate power, puts himself at the top of this tower. Instead of telling the heroes the meaning of life, he tells them that all life is meaningless and will end by him. The music of Movement III even adds weight to his claim of divinity for himself. Not only does it display music commonly connected to sacred music, but his leitmotif is crafted into the counterpoint restating his claimed divine status.

Oh, and just in case you didn’t catch it yet, this is how he shows himself in the fourth movement and final face-off: 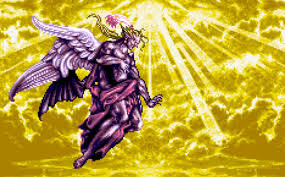 If you are interested in more of the series start here! You can watch my writing evolve. And meet another secret Batman.